The oboe and bassoon are members of the woodwind family.  They use a "double reed," which is made of two pieces of Arundo Donax cane vibrating together when air is blown between them.  Because double reeds are so challenging, many students must audition in order to play oboe or bassoon at school, and most of these students are in advanced/gifted classes or have prior musical experience.  However, being intelligent is not enough to succeed on an oboe or bassoon - you need practice, a competitive spirit, and a sense of humor!

During the Baroque Period (1600s), the first oboe (or hautbois, meaning "high-wood") was created in France, where it was used to entertain the French court.  Today the oboe is used in both wind ensembles and symphony orchestras.  Ensembles usually tune to the oboe before concerts, and the oboe is given lots of solos due to its beautiful, characteristic tone.  The oboe is typically made out of grenadilla wood and has a very delicate system of key-work.  Some famous oboe solos include the intro to "Bacchanale" from Sampson and Delilah, and the Peter and the Wolf  duck solo.

The bassoon is a much larger double reed instrument, requiring a wider reed and a seat strap for holding the boot joint.  It evolved from a 16th century instrument known by a variety of names - curtal or curtail (English), basson or fagot (French), dulcian or fagott (German), fagotto (Italian), and bajon (Spanish).  During the 1880s there were two main schools of bassoon-making - the French system and the German system.  The German bassoons were made under Heckel, which is now widely recognized as being the one of the best makers of bassoons in the world.  Bassoons are commonly constructed from maple wood and have more thumb keys than any other woodwind instrument.  You may have heard bassoon solos such as the grandfather theme from Peter and the Wolf, or the melody from The Sorcerer's Apprentice. 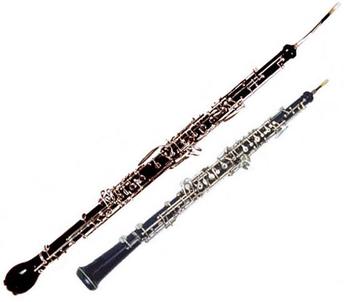 The English horn (or "cor anglais" in French) is essentially a tenor oboe pitched in the key of F.  It is 1.5 times as long as the oboe and has an onion-shaped bell, which contributes to its covered and sonorous tone quality.  There are many beautiful solos written for English horn - I tell my students "When you watch a sad movie, listen for the English horn!"

The English horn is actually not English at all...the term "cor anglais" is believed to have come from the name "cor angle" because of its earlier bent shape, similar to the oboe di caccia, a hunting oboe played on horseback.  Other historians believe the original name was "cor angel" due to the depiction of EH-like instruments in religious art.  In either case, it's not English, it's French.  Now go confuse your friends.

My oboe students do learn to play the EH in lessons (usually by the end of middle school).  All of the fingerings on the EH are the same as oboe, and it just requires a slightly bigger reed and a tad more air.  It is heavier than an oboe so many students prefer to use a neck strap.  Some school band programs have an EH, and it is good to be prepared just in case a band director asks you to play it.  English horns are expensive, but if you own one, you are almost guaranteed music gigs!